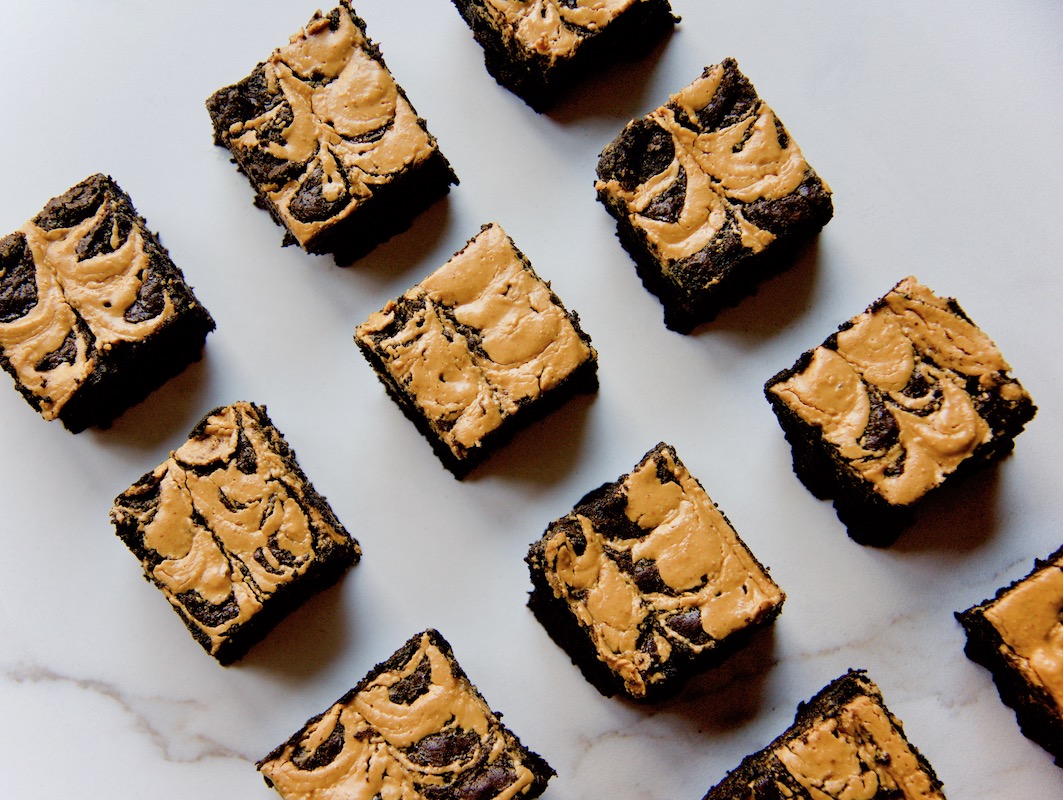 Let me just cut right to the chase: these delicious gluten-free peanut butter brownies are fudgy and decadent, made with serotonin-boosting bittersweet chocolate and happiness-inducing mucuna bean powder.

(And if you don’t want to add the superfoods, leave ‘um out. The recipe holds up either way. These are still the best brownies ever! 🙂 )

Below is some background on mucuna, which I started seeing at wellness centers and juice bars across the U.S. and Europe a few years ago. (It emerged around the same time that CBD oil was gaining prominence in the wellness world– and it has just as much research to certify its efficacy.)

Mucuna pruriens, also known as velvet bean, is a bioavailable source of L-Dopa, an amino acid that metabolizes into dopamine in the brain. (Dopamine is the neurotransmitter responsible for happiness.)

This naturally occurring, caramel-tasting bean powder makes a sweet addition to this delicious gluten-free brownie batter. It makes an ideal complement to the chocolate in this recipe, while gently elevating mood and soothing the nervous system.

Mucuna pruriens is also true brain food; research suggests that it may also help boost libido and regulate sleep patterns, which is why health-oriented cafes and juice bars use it in smoothies, oatmeal, ice cream, and baked goods.

And then there’s the chocolate. Decades of studies have shown that chocolate is a natural trigger for serotonin— another “feel good” neurotransmitter that contributes to feelings of wellbeing and happiness.

The below recipe contains twice the amount of chocolate as regular brownie recipes. This ratio yields a silkier, truffle-like consistency with added flavonoids.

These easy, fudgy brownies are also gluten-free and collagen enriched for added brain-friendly amino acids– but there’s also so much chocolate, butter, sugar, and peanut butter that you won’t be compromising on taste.

As a result, these gluten-free peanut butter brownies are particularly good for people who are feeling down and need a mood boost.

“Dessert” is already an intrinsically whimsical thing, but this delightful brownie recipe takes the good vibes to another level.

If you’re weary of using mucuna or don’t want to buy it online, leave it out. The recipe is just as good without it and you’ll still get the benefits of serotonin from the double-portion of bittersweet chocolate.

Fun fact: there is about twice as much chocolate in this recipe as in standard brownie recipes. However, you might want to avoid these brownies if you are caffeine sensitive. There is a LOT of chocolate in this batter.

As noted above, this recipe is gluten-free. It can also be made dairy-free by substituting melted coconut oil for the melted butter. That being said, these brownies pair really nicely with a big glass of milk! We also love them in a sundae. Enjoy!