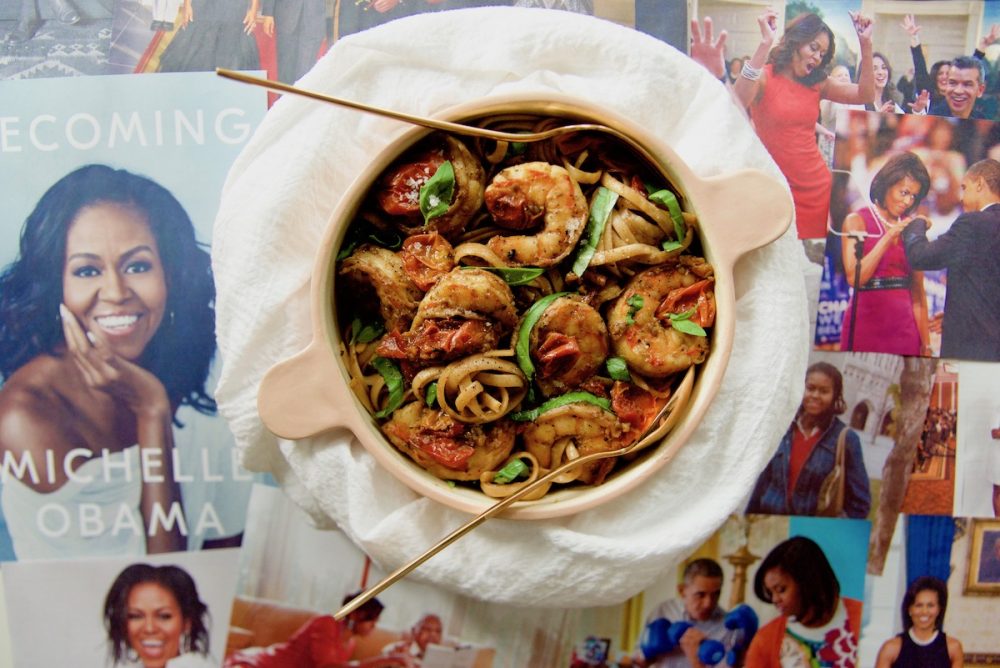 Michelle Obama’s epic shrimp linguine recipe was something I saw whispered about in various presidential profiles detailing what Barack Obama liked to eat at home. Eventually, I found the recipe on Genius Kitchen and decided to make it fresh with a few modifications, below. (Minor adjustments made to up the nutrient profile while making the dish even easier to prepare.)

The resulting pasta dish is simple, sophisticated, and delicious. This is a lovely recipe– no wonder it was Barack’s favorite meal! According to lore, Barack Obama had two favorite meals in the White House: this recipe for Michelle’s shrimp linguine, and Tex-Mex style chili.

I recommend making this shrimp linguine as a summer meal, when fresh shrimp is more readily available. It also pairs beautifully with crisp white wine, like a Riesling (another fixture of summer). But in a pinch– or if you’re squeamish– frozen shrimp will work just fine. Barack Obama’s favorite meal can be yours, too.

If sundried tomatoes aren’t your thing, try blistering fresh cherry tomatoes with a little oil and salt until almost stewed.

Next, stir in 1 Tbsp of balsamic vinaigrette, pour off the extra liquid, and use the tomatoes in place of the sundried tomatoes in the recipe. (That’s what I’ve done in the photos above, since I ran out of sundried tomatoes on Photo Shoot day. 🤦‍♀️ This recipe is equally good either way!)

“There are still many causes worth sacrificing for, so much history yet to be made.”– Michelle Obama