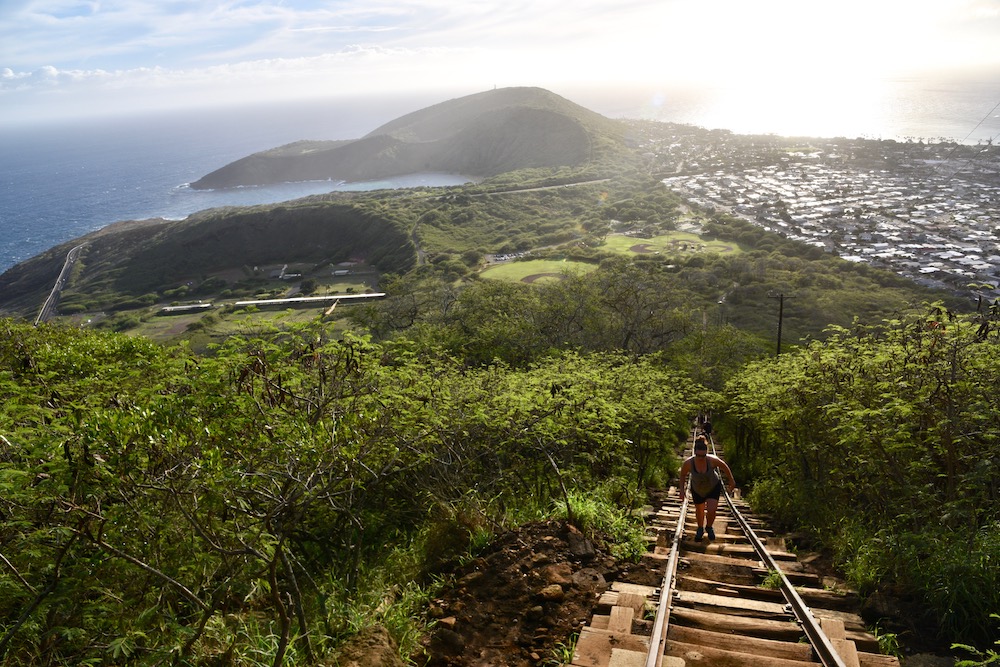 The island of Oahu has some of the best mid-range hikes in all of Hawai’i. While the best hikes on Oahu aren’t always obvious to outsiders, locals know that apart from Stairway to Heaven– a fabled, dangerous, and technically illegal hike that you should not attempt– social media and the Internet forums are making many island hikes more accessible to visitors.

The previously “undiscovered” hikes in this list are now more popular than ever. Below we spotlight five must-do hikes for outdoor adventure lovers visiting the island.

Plan to attempt at least one of these hikes on your next trip to Oahu, and you’ll be glad you did. Some of them are easy; some of them are super hard; and pretty much all of them require shoes with traction, though you’ll definitely see people doing them in flip flops. (Tourists, am I right?)

Either way, you won’t regret the grind once you see the views. Each of these hikes is special and unique in its own way. As the locals say: E Komo Mai— Welcome to Hawai’i.

The Lanikai Pillbox Hike is a super popular 2-mile roundtrip hike in Kailua, on the windward side of Oahu. This steep, rewarding hike towers over beautiful Lanikai Beach, a residential beach that offers optimal conditions for kite surfing and post-hike swimming in lovely turquoise blue waters.

What’s crazy about this hike is that it’s actually quite challenging, and yet I’ve seen everyone from grandmas wearing clogs and carrying leather handbags to barefoot children, middle-aged runners, and shirtless teenagers deftly navigating this trail, which traces of the ridge of a small mountain overlooking the sea.

Everyone wants a piece of it, and the epic 360-degree views of the ocean, surrounding mountains, and neighborhood are totally worth the challenge. Just be sure to take your time– and if you’re afraid of heights, tread gently.

It takes about 90 minutes for most people to hike up to the second pillbox (the second of two former army bunkers that are now covered in graffiti) before turning back down to complete the hike.

Ideal times to hike the Lanikai Pillbox hike are around sunrise and in the late afternoon when there’s more room on the trail. (This is my favorite time of day to go.)

The Lanikai Pillbox trail doesn’t have any shade, but there’s a nice breeze at the top and there are usually enough people on the trail to direct you in case you are unsure which fork in the path to take. (The path is clear, so you can’t really get lost. However, the footing can at times be challenging, so it’s best to observe the people in front of you and see what they’re doing.)

Parking in Lanikai can be challenging, so plan to Uber or bike if you can. Otherwise, you’ll need to park on a side street in the residential neighborhood at the base of the trail. Then, walk up Ka’elepulu Drive to enter the trail.

The Lanikai Pillbox Hike begins with a steep left turn up a dirt path that starts diagonally North across the street from the Mid-Pacific Country Club.

The trail begins to the immediate left of the gate at the end of the road, next to a sign that says, “No Trespassing”. You’ll likely see someone entering or exiting the trail, which is marked by a small, janky sign that announces the access point. If you don’t see the sign that says “Pillbox hike —>,” just ask someone and they’ll direct you. Once you get on the trail, you can’t miss it.

When you finish the hike and return to the street, continue walking straight down Ka’elepulu Drive towards the water, where you can access Lanikai Beach through Access Point 3. This is a great place to cool off post-hike.

My favorite combo is to hike Lanikai Pillbox in the late afternoon (around 3 PM) and then head down to the beach for a golden hour swim. Then, stay and watch sunset! I live in the neighborhood, and it is THE best thing ever– especially on a hot day.

Olomana Three Peaks is a very very very hard hike that is only for experienced hikers!! And it’s not for those who are afraid of heights, by any means. That being said, Olomana is easily one of the best hikes on Oahu– or at least the most rewarding.

The Olomana Three Peaks Trail offers some of the most rewarding views on the island– but you’ll have to scale a small section of exposed rocks to see it, and careless people have died doing so in the past.

This hike is also located on the windward side of Oahu, at least a 25 minutes drive from downtown Honolulu. The entrance is located past the gates of what looks like a private country club, but even though there are some vague signs about trespassing it is actually open to the public, so don’t worry.

The weather-worn sign at the beginning of the trail looks like it says “Olomai.” GPS will take you there accurately. Occasionally, people have tagged the sign “YOLOMANA”– because, well, this hike is insane. The are ropes in parts of the climb that are necessary for navigating the trail, unless you are a professional rock climber.

It’s super intense, but there are epic views at the top.

Again: THIS IS NOT FOR NEW HIKERS OR PEOPLE WHO HAVE NEVER HIKED IN HAWAII, COLORADO, OR THE WEST COAST! “Three Peaks” has a full-on rock climbing section that you need to use a rope for.

There’s a high risk for injury if you’re not confident holding your own body weight. (The reason I’ve linked to an IG picture here is because it is too risky for me to bring my camera when I hike Olomana.)

Parking is on Auloa Road, but it’s a good idea to take an Uber here. Also, be sure to finish before it gets dark. Several people– myself included– have gotten lost on the way back down when it’s too dark.

The Koko Crater Trail Hike is one of 5 trails in Koko Crater Regional Park. This beautiful, forested area on the southeast side of the island is a short drive from Diamond Head and Hawaii Kai.

Koko Head is a fairly strenuous, 2.9 km out-and-back incline hike that traverses the old Koko Crater railway tracks. (The tracks were previously used by the military during World War II, to transport goods up and down the mountain.)

There are 1000+ steps to this hike, which requires proper footwear if only because some of the steps are splintered. There are also hundreds of feet of rusty iron tracks, screws, and industrial bolts that look like they would hurt to step on.

Because of the spaces between the slates, there is also a high risk for ankle twists on this hike, so plan footwear accordingly.

This hike is also in full sun, so wear sunscreen and bring water. The best time to go is in the early morning or late afternoon. It’ll be tough on your calves if you’re new to hiking, but the coastal views from the top are breathtaking. In spring and summer, beautiful wildflowers line the track.

Most of the best hikes on Oahu are located on the windward (east) side of the island. However, the Maili Pill Box Hike offers an excellent change of scenery on the leeward (west) side.

The west side of Oahu is much drier and more desert-like than the east side, with similarly stunning ocean views. This makes sense, as Māʻili Pillbox is the sister hike to the Lanikai Pillbox hike on the windward side.

In October 2015, the third pillbox on the trail was painted pink for Breast Cancer Awareness Month. Since that time, the pillbox has become a local landmark, recognizable in Instagram photos as “The Pink Box.”

Hikers continue to add graffiti notes to the walls championing their support of breast cancer survivors and the cause. The top of the box also offers a great photo op, as shown above.

Located within the Koo’lau range on the south of the island, the Manoa Falls Trail Hike is a muddy, accessible hike to a waterfall. Like many of the best hikes on Oahu, this 1.3-mile out-and-back trail is popular with tourists and experienced hikers. (This is in part because they filmed scenes from Jurassic Park here.)

The hike takes 1 to 1.5 hours roundtrip. Interestingly, the real star of the hike is the surrounding jungle, not the waterfall at the end. The Manoa Valley looks like a scene from Ferngully! The beautiful monkeypod tree canopy casts shade over giant climbing monstera, jungle fern, blossoming ‘Ohi’a lehua trees, and hanging hibiscus.

There are also giant moss-covered “fairy logs” and serene bamboo tunnels throughout the trail, which is not very steep. It rises approximately 800 feet to the falls.

PSA: you should not drink or swim in the falls! The Manoa waterfall might look picturesque, but the local feral pig population pees in the water. This, in turn, puts swimmers at risk for contracting Leptospirosis (a very unsexy picture of paradise– sorry to be a buzzkill).

The Manoa Falls Trail is also pretty muddy even when it hasn’t rained. Be sure to wear shoes with good tread that you wouldn’t mind dirtying. Fortunately, there are hoses back at the trailhead for rinsing off shoes and legs afterward.

Parking in the onsite lot at the beginning of the trail is $5, cash only. (Place the validated ticket on your dashboard and you’re good to go.) Of all the beautiful hikes that people would regard as the “best hikes on Oahu,” this one is probably the easiest.

Work up a sweat during your hike? Here’s how to make electrolyte-rich mangosteen juice from the fruit you can only get at O’ahu’s Best Farmers Markets.

Related: 8 Great O’ahu Breakfast Spots and a food critic’s guide to the 25 Most Amazing Restaurants in Honolulu.