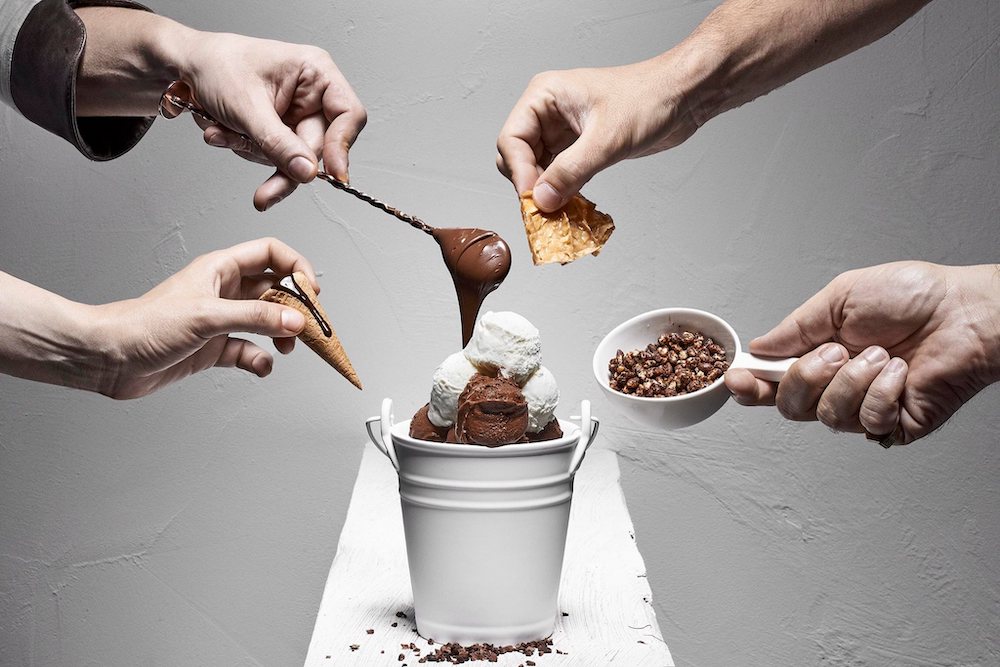 In Milan, as everywhere in Italy, you’ll want to try the local gelato– specifically, the stracciatella flavor, which is light vanilla ice cream packed with slivers or chunks of chocolate. But knowing where to get the best gelato in Milan, however, can be slightly overwhelming.

Fortunately, we can help you with that. 🙂

But first, here’s some quick background info to keep in mind before ordering your first gelato in Milan:

Gelato in Italy is more “melty” and has seemingly more body and “goop” than traditional ice cream found elsewhere in Europe, the US, and beyond.

It’s even different from the texture of gelato you can get in nearby Barcelona or Paris, which tend to follow the Italian’s lead when it comes to designing new gelato flavors. (Fun fact: Gelato was actually invented in Paris in the late 1600s. It was invented by an Italian chef working in Paris, but still.)

You know how people like to leave a pint of ice cream on the counter so that it will soften up? That’s the ideal temperature and texture at which the Italians like to serve their gelato. (At least good gelato, anyway.)

Like a fine cheese, the flavor “pops” more at this slightly melted temperature. This is part of the magic of eating gelato in Italy, which is a bucket list experience. Those subtle flourishes make the experience even more indelible.

Below, we spotlight where to get the best gelato in Milan, Italy. (In no particular order.)

I love their salted pistachio gelato and the fact that they are very eco-conscious. Terra Gelato is a hidden gem in Milan! Locals adore it, as it is modern both in sensibility and with regards to the flavor profiles they choose to highlight.

Ultimately, I think it’s some of the best “modern” gelato in Milan. The fragola (strawberry) flavor is an enduring fan favorite– but I love the Amalfi Lemon, Sicilian Pistachio, and the Caramel and Cookies gelato the most. Try these flavors if you can.

I also appreciate the regional specificity they put into naming where each featured ingredient comes from. (It really encourages a sense of immersion in the place.)

Plus, Terra is also vaguely artsy, which adds to the gelato shop’s aesthetic appeal. It’s small but charming!

Beloved local staple Il Massimo del Gelato (in English: “The Best of All Gelato”) is known for its super-rich depth of flavor and the wide variety of chocolate-themed gelatos. There’s seemingly always something new to try!

^ I recommend sharing all three!

Il Massimo even has quirky, foodie-friendly flavors like nettles & cream, Williams pear (a popular local variety), greek yogurt, ginger-cinnamon, Jamaican chocolate, and spicy Aztec chocolate, which– although it’s an increasingly popular flavor outside of Italy– has not generally been embraced in these parts until recently. (Unlike indigenous Central and Latin Americans, Italians historically didn’t infuse chocolate or ice cream with any savory spices. And because Milan’s food scene is deeply traditional, it’s taken a while to evolve.)

Either way, be sure not to leave here without at least sampling what might be Milan’s fanciest gelato: a rich dark chocolate gelato infused with 100% gold flecks. (It’s sort of the signature flex at this ice cream parlor.) Fancy, fancy!

For what it’s worth, the artfully sculpted pastries here are sumptuously good, as well. Come for the ice cream, stay for the cake!

Cioccolati Italiani (Staple Near The Duomo)

Cioccolati Italiani is a solid mainstream gelato institution in Milan that appeals to younger, hip locals and tourists, alike.

The flavors here aren’t super exotic or sophisticated, but the classics– chocolate, vanilla, pistachio, etc– always deliver. This is a great spot for people who don’t like to get too experimental with their ice cream flavors. (I’m pretty adventurous when it comes to this, but I understand. Sometimes you just want to play the hits!)

Today, the nimble, skinny cones at Cioccolati Italiani are instantly recognizable for this reason. The clean, compact scoops and fast service make it ideal for first-time gelato purists in Milan.

Ultimately, this is also a great spot to get quality ice cream near the Piazza del Duomo. Plus, in addition to gelato, they have other indulgent pastries and chocolate-infused baked goods, as well.

Also, be sure to check out their collection of fine seasonal chocolates and chocolate hazelnut crepes. (If you’re a crepe lover, this place has you covered.)

PSA: They also make a darling cappuccino, heavy on the foam and with a generous sprinkle of powdered cacao to finish it off. (It’s perfect.)

Avgvsto Premiata Gelateria is frequently rated the “Best Ice Cream Parlor in Milan” according to locals, and with good reason.

This seasonally-inspired gelato shop is both adorable and reasonably priced for Milan, and people love the friendly service. Plus, they do great versions of all chocolate and coffee-flavored gelatos using a carob base. (Which is notably vegetarian-friendly.)

Try their epic gelato brioche— a distant, upscale play off of an ice cream sandwich– or the gelato topped hot chocolate.

Spring, when it rolls around, welcomes light, boozy flavors like zabaione (a Milanese dessert cream made with egg yolks, sugar, and sweet wine) and malaga (rum raisin) while Autumn flavors are richer, including Biscotti & Cream and Cassata Siciliana. (<– This is a novel flavor inspired by a traditional Sicilian cake consisting of liqueur-infused sponge layered with ricotta and candied fruit.)

Either way, the seasonal offerings here are enduringly satisfying any time of year.

In the Summer, I particularly love their fig gelato— a rare flavor you don’t often see around the city unless you’re eating at a fine dining restaurant.

The ginger, hazelnut, and mango flavors here are also very good. Fortunately, the shop is generous with samples. 🙂

This artisanal, award-winning gelateria is still mostly under the radar, even among foodies in the city (largely due to their inconspicuous location between commercial Zona Buenos Aires and Porta Venezia). Gelato Giusto‘s beautiful, fabulously-ropy gelato is a wonderful delight for the senses, however.

Not only do they serve exotic flavors like kiwi, rabarbaro (rhubarb), te hojicha (green tea), ricotta with bitter orange (so rich!), pine nut (a unique treat!) and honeycomb (great for superfood lovers!), but they also pride themselves on making their own chocolate for use in their homemade ice creams. It’s an extra step that not every Milanese gelateria takes. (Owner-Chef Vittoria Bortolazzo is a Maître Chocolatier.)

Naturally, they also source their milk and staple ingredients from local Lombardy dairy farmers. The effort comes through in this Milan gelato shop’s nuanced flavors. Everything here is 100% natural, handmade, and indelible.

If you want something on the lighter side, opt to try the banana-walnut-chocolate sorbetto, or the papaya sorbetto.

Ultimately, this is one of the best Milan gelato shops for foodies. We even like the subtle flourishes, like how they dome their cups of gelato in perfect sculpted mounds (unlike some of the other vendors in town, who can be pretty nouvelle art about the way they just shellac it to the cone).

Find more insider food and travel guides in our critically-acclaimed Travel Well section, which features popular as well as up-n-coming travel destinations from around the world.