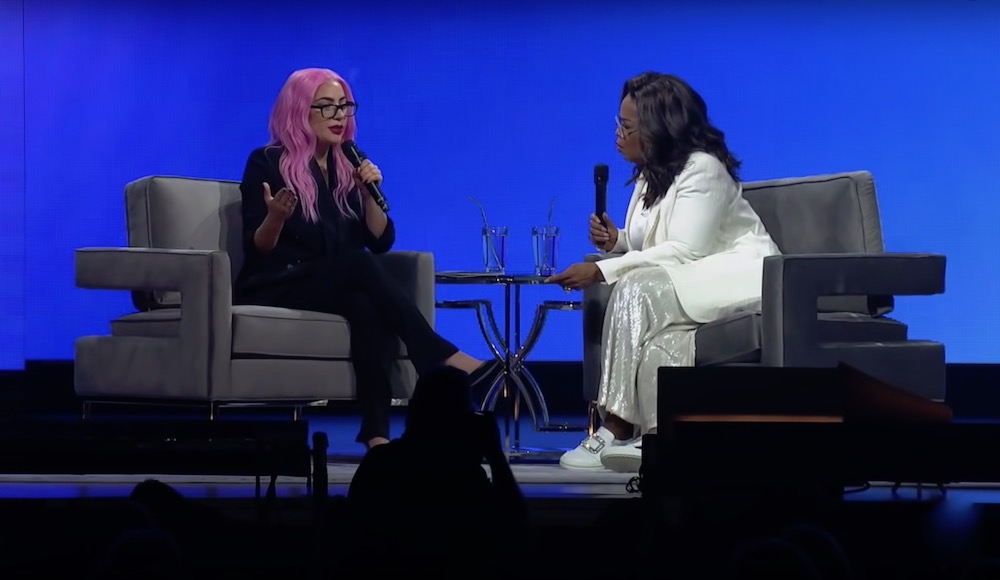 Oprah’s 2020 Vision Tour is a series of conversations between Oprah and various innovators and change-makers in society. In a recent candid interview with Lady Gaga in Fort Lauderdale, Florida, the two spoke about Gaga’s career and also her focus on mental health. They also spoke about spirituality, and an innovative dialectical behavioral therapy concept called “radical acceptance.”

“I think the most shocking thing that I could possibly do is be completely vulnerable and honest with you about my life and what I’ve been through,” said Gaga.

“And the struggles that I’ve seen and been a part of, and sharing that with the world… can help other people who are suffering.”

“One of those things that I care deeply about is mental health. Mental health is a medical condition,” she continued. “It should be treated as a mental health condition. And it should not be ignored.” (This comment garnered intense applause from the audience.)

She also spoke candidly about her struggles with PTSD, fibromyalgia, cutting, and medicating for her personal struggles with mental illness. Eventually, the conversation turned to a mental health hack called “radical acceptance,” which Gaga learned from dialectical behavioral therapy. This portion of the conversation was particularly compelling for the audience and for Oprah, as well.

“I have ‘radically accepted’ that I will put my shame in a box all the way over there and make it very small,” said Gaga. “And I will say that I have mental health issues. I take a lot of medication to make sure that I stay on board. I’m also a survivor. And I’m living. I’m thriving. I’m strong. And I’m going to take all of my life experiences and share them with the world to make it a better place.”

“Wow,” Oprah says in response. Later, she rejoins, “You can’t move forward with anything in your life until there is radical acceptance.”

Watch the video, below. (The portion of the conversation pertinent to “radical acceptance” begins around the 19:30 mark. Enjoy!)

Later, Oprah continues: “All stress comes from wanting something to be what it isn’t. And it doesn’t change until you first accept it for what it is, and then make a decision about what to do next.”

For more info about Lady Gaga’s mental health advocacy work, visit the website for her Born This Way Foundation.

“All stress comes from wanting something to be what it isn’t. And it doesn’t change until you first accept it for what it is, and then make a decision about what to do next.”– Oprah, on Radical Acceptance

Related: Listen to Jim Carrey’s “Choose Love” Speech. Then, Watch Obama Call Out “Woke” Internet Culture with a Simple Invocation: “That’s Not Activism.” (<— It’s worth it for the Grownish references alone.)