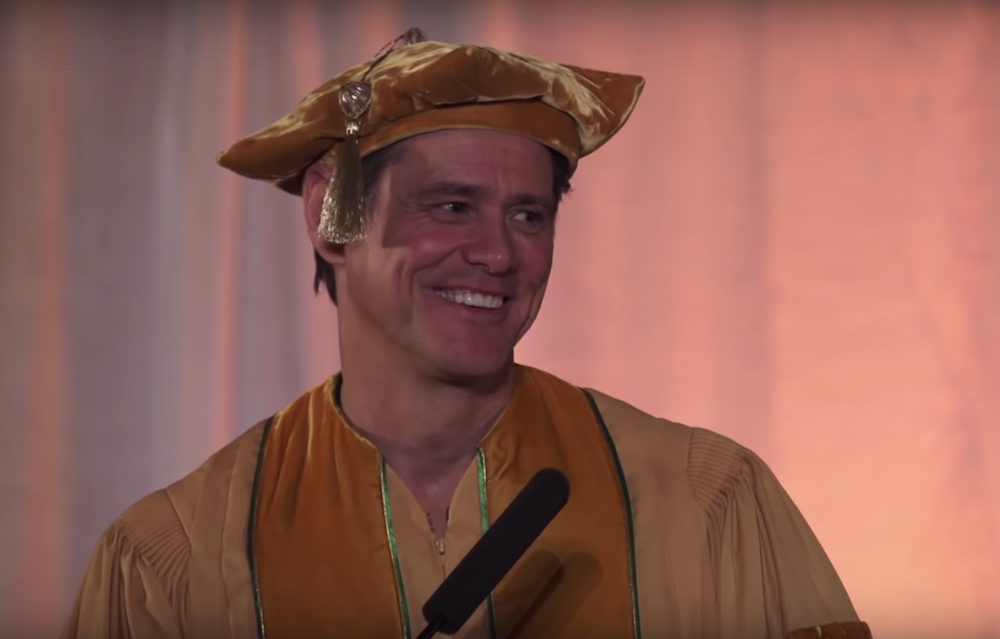 Jim Carrey has given a surprising number of motivational speeches in his life– and for those who don’t know, the man who presents as a goofball in most of his acting roles is actually quite a thoughtful, measured, and inspiring guy.

His philosophy on life is filled with gratitude, poise, and an emphasis on choosing love over fear– a message that feels more relevant now than ever.

Below, you can watch two versions of Jim Carrey’s iconic “Choose Love” speech, which served as Carrey’s 2014 Commencement Address at the Maharishi University of Management in Iowa.

Maharishi University is a small, private university in Fairfield, Iowa that offers a “Consciousness-Based Education.” The curriculum integrates self-development programs like transcendental meditation and mindfulness.

The goal of such an education is to arm students with the tools necessary not only for self-development but for developing their higher selves.

While Carrey’s graduation speech never went fully viral at the time, it now has a cult following on the Internet. Many people who watch it are never quite the same.

Watch the videos below and you’ll understand why.

First, watch this beautiful supercut of the most quotable audio from Carrey’s speech, which highlights scenes from Carrey’s illustrious career:

Consequently, the “Choose Love” speech launched a thousand born-again Jim Carrey fans. Jim Carrey is now the patron saint when it comes to “freeing people from concern”. (That will make sense if you listen to the full speech.)

This is especially true on Twitter, where the actor shares more of his paintings and social commentary that increasingly blurs the lines between performance art and activism.

Carrey is a vocal liberal, to say the least, and his Twitter followers love it.

Below, you can watch the full MUM speech in context. The “meat” of Carrey’s speech begins at the 3:43 minute mark. Before that, it’s just banter and jokes.

“I can tell you from first-hand experience that the effect you have on others is the most valuable currency there is.”

Carrey’s speech crescendos with an oft-quoted conclusion about the interconnectedness of kindness, joy, destiny, and fate.

“You are ready and able to do beautiful things in this world. And as you walk through those doors today, you will only have two choices: love, or fear. Choose love, and don’t ever let fear turn you against your playful heart.”

And what a playful heart, indeed!

Related: 9 Inspiring Books That Will Restore Your Faith in Humanity.

This 80-Year Harvard Study Found A Key Secret to Living a Meaningful Life. Living well often entails spontaneity, awe, and new experiences like those you have while traveling. But living a meaningful life often comes down to one factor: having strong relationships. Read more.

If you liked this speech, then you’ll love Sarah Blondin’s Honoring Life Meditation.