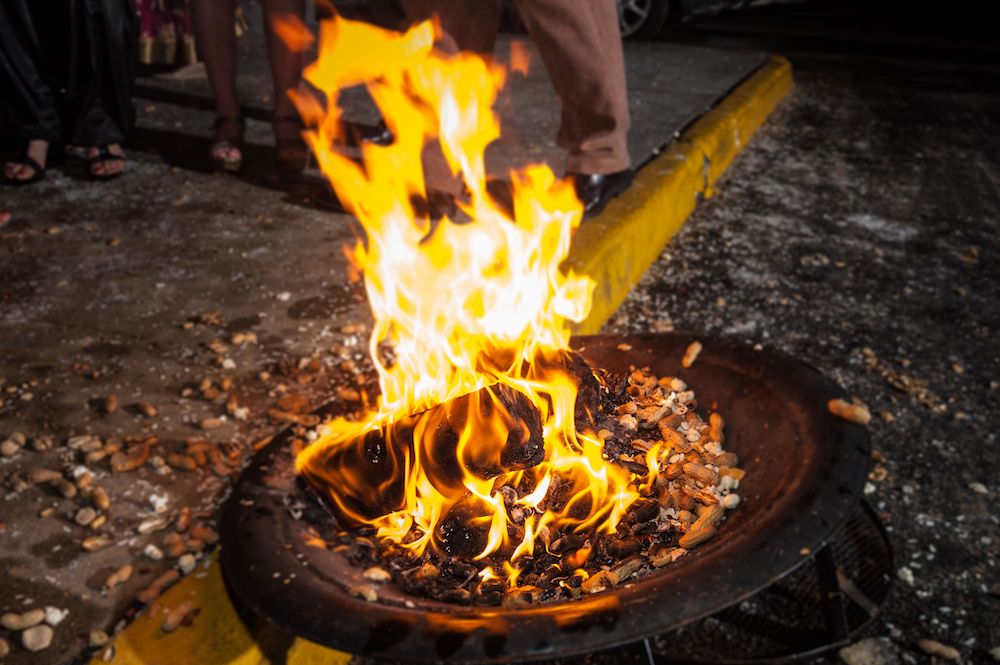 The New Year brings with it lots of fluffy traditions that don’t always seem rooted in history or culture, but Indian Lohri celebrations date back thousands of years and have a certain joyful magic about them.

Like going to an Indian wedding, attending an Indian Lohri party is a bucket list item for many curious and well-traveled Western people, who are enamored by the colors, food, culture, and traditions that hail from this unique region of the world.

Ultimately, Lohri parties are beautiful, unique, and always cheerful celebrations. (Which is great because they take place during the grayest part of winter.) Being invited when you’ve never been to a Lohri before is a very cool experience!

In India, Lohri traditions vary from village to village and can be very nuanced. The below details merely reflect how Lohri parties are typically celebrated in the West.

Here’s what to expect.

Lohri celebrations always take place January 13th, aka in mid-winter, to honor the winter solstice. Known traditionally as “The Harvest Festival” (because it takes place at the beginning of the harvest season in Northern India), Lohri is celebrated primarily in Punjab, and in regions like Jammu and the Indian state of Himachal Pradesh.

Ultimately, Lohri Parties are sort of like an equivalent of a New Year’s celebration– a time to honor and reflect on life milestones that happened in the past year, specifically weddings and births.

Lohri parties are traditionally thrown in someone’s honor— say, if a couple got married or had a baby in the last year, the Lohri party would be to celebrate these milestones. The parents of the couple who got married– or the grandparents of the new baby– are the ones who host the Lohri, which they throw in the couple’s honor.

The standard greeting on this holiday or at a Lohri party is “Happy Lohri!”. (During this time of year, Hindus also celebrate with a solstice festival called Makar Sankranti, which is all about the sun’s transit to Capricorn. The idea is similar, but Lohri parties mark a distinct Northern India festivity.)

When my mother-in-law was a child in India, kids would go house to house with a bag on the day of Lohri, and people would give them popcorn, sesame sweets, and money– almost like Halloween in the U.S.. The families who give out the treats are the ones in which there has been a birth or marriage of a son in the last year.

At night, these people would celebrate on their own with their families. Now, however, people tend to throw big parties and invite everyone they know.

Historically in India, Lohri parties were only for sons who got married, or to celebrate the birth of sons. Today, fortunately, things have modernized. In the West, the Indian Diaspora has adopted the practice of throwing Lohri parties for any child who gets married, and any grandchild who has been born (regardless of if they are male or female). Hooray for progressivism!

Either way, Lohri parties are always thrown by the parents or the grandparents of the male who was married or new to fatherhood. (This is assuming a heterosexual marriage.)

Unlike baby showers in the U.S., however, you can have unlimited Lohris. So, if the couple has 5 kids, they’ll have a Lohri party for every one of them. Indian people love a party!

There Will Be Fire (Real or Symbolic)

Every Lohri party involves a bonfire, song, and dance. The fire represents purity, and it comes into play when the couple being celebrated (either the newlyweds or new parents) walk around the fire several times while throwing peanuts and popcorn– aka “seeds”– into the fire.

This process symbolizes a sort of “out with the bad, in with the good” ritual. Basically, the idea is to “burn the bad” and start fresh, so that new blessings can emerge. Again, it’s sort of akin to a New Year celebration in this way.

As the couple walks around the fire, guests gather around to cheer and clap. (Usually outside, but this can also be done inside in a controlled, fire-safe environment.)

Any older family members in the family may also do a prayer for the couple during this time.

Because it’s the harvest festival, Lohri parties celebrate new beginnings — aka the start of the new harvest season in northern India (which begins in mid-January).

This is why the couple throws peanuts and popcorn into the fire; they represent the seeds of new blessings to come.

Hosts also usually give little bags of peanuts, popcorn, and sesame candy as party favors. Some regional variations may include pieces of jaggery (raw brown rock sugar) or ladoo (an upscale Indian sweet often given as a favor at weddings).

Either way, expect to walk away with some snacks!

At my husband and my wedding Lohri, we gave a special ladoo made with khoya (milk powder) and sesame seeds, which made the favor a little fancier. These are called til bhuga ladoo, and that’s a picture of them, below.

My husband’s parents wrapped these in little blue silk bags with our names and the date of our Lohri party embroidered on them. (Which again, looks not unlike a wedding favor. My in-laws were feeling fancy!)

Thus, if you have a peanut allergy, be wary of these favors! They will almost certainly contain nuts.

Certain dances at Lohri parties may involve family members presenting baskets of popcorn and peanuts to the couple, as well (more on that later). This is good luck and symbolizes blessings and forthcoming abundance for the couple.

People Will Dress Up

(^ The above links are all direct Amazon Affiliate links, for easy shopping. Choose from any size and color that fits your taste! There are no traditional Lohri colors, so any color clothing that you like will be suitable.)

If you are Western or not familiar with the culture, there’s absolutely no expectation that you would dress in the native garb– but you are welcome to if you have some or know an Indian friend who can help you out! For those who are new to this kind of clothing, dressing up can be really fun!

Those who opt to wear Western clothes typically dress business casual— like what you might wear to a nice New Years Eve party.

This usually means a jacket but no tie for men, cocktail dress and nice shoes for women, etc. Jewelry is also a plus! Punjabi women (those from the region of India where Lohri originated) famously love to wear lots of heavy, sparkly gold jewelry to these kinds of events.

So, the more baubles, the better!

At any Lohri party there will be lots of food— usually appetizers, dinner, and dessert— as well as a bar and a dance floor, if the family throwing the party has rented a hall.

Otherwise, if the party is in someone’s home, you can definitely expect to be fed. (Like any Indian celebration, there is *always* food at a Lohri.)

One of the signature dishes you can expect at a Lohri party is saag and makki ki roti. This is a special staple of North Indian/ Punjabi cuisine. It consists of a flat, unleavened cornmeal bread (aka makki ki roti, which is a gluten-free roti that’s almost like a tortilla) and saag (a rich green vegetable “sabji” made with spinach, mustard greens, broccoli, or other dark, leafy vegetables blended with ghee and spices).

Typically, you cover the makki ki roti in ghee and jaggery (essentially butter and sugar) before spooning some saag into the middle. You eat it almost like a sweet-and-savory taco. (It’s my Punjabi mother-in-law’s favorite dish!)

Otherwise, you can expect all kinds of Indian food at a Lohri party– including chicken, meat, fish, and vegetarian dishes with served with rice, daal, achaar (pickles), naan, and pakoras (fried Indian fritters).

As mentioned above, there’s always song and dance at any Lohri party.

You might see something like a “money dance”, where family members shower the couple in dollar bills while they dance. (The so-called “making it rain” symbolizes blessings. The idea is that the money will ward off najar, aka bad luck.)

On the dance floor, expect to see North Indian Bhangra and Gidda, two distinct styles of dance that hail from Punjab. Women and men may take off their shoes for this, as is customary.

Someone may also play the tolki, a special drum reserved for celebrations.

There May Be Speeches, Singing, & Performance (Like A Wedding)

Like a wedding, there may be a moment in the evening before or during dinner when those close to the people throwing the party get up to say a few words.

At the Lohri party my family threw for my husband and me after our wedding, my brother-in-law made a few jokes, a family friend sang a traditional Hindi song, and our entire family (including both sets of parents) performed and Indian dance routine that involved lip syncing and a few partner duets.

All of my mother-in-law’s female friends also did a group dance to “bless” my husband and me.

One of the most famous Lohri songs out there, which you can expect to hear at every Lohri, is “Sundar Mundariye” aka the “Lohri” song, which was popularized by Harbhajan Mann. It tells a Robinhood-like story that takes place in Punjab. (And it’s just one of many old folklores associated with Lohri.)

^ This song is so recognizable to people in the know that you might see guests yelling “hoya!” during the refrain. Most likely, someone will perform to this song.

While gifts are by no means expected, some guests like to bring a small gift for the couple. This is usually money or gift cards, or a baby gift if the Lohri party is celebrating a birth.

In India, people usually give money (a similar amount to what you’d give at a wedding). Still, this is mostly something that only old-school Indian aunts and uncles do.

Because there is no expectation of gifts, there is no time during the Lohri party when the host would open them. Similar to a wedding, someone will discreetly store away the gifts for the couple to open later.

Otherwise, as mentioned above, it’s usually the guests who receive gifts– cute bags of popcorn, peanuts, sweets, dried fruit, ladoo, etc. The idea is always to “give Lohri” by spreading joy and abundance to everyone who comes to celebrate.

Ultimately, Lohri parties are all about enjoyment and reveling in the blessings of new life changes. Mostly, they’re about spreading joy. And with this much merriment on display, it’s easy to do.