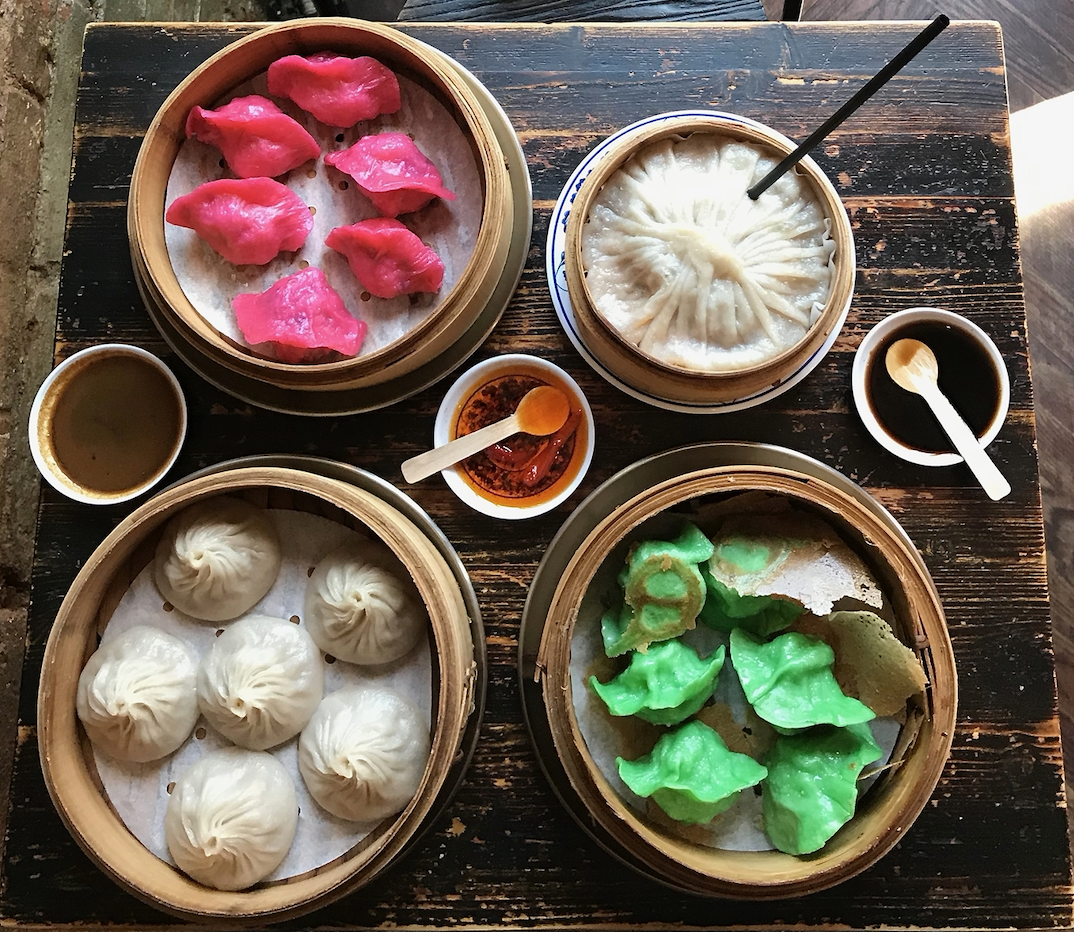 The best dumplings in NYC are found across a constellation of neighborhoods: there’s Chinatown, of course, but also the East Village, Flushing, Financial District, and even Midtown. So where can you go when you want a delicious helping of hot dim sum in the Big Apple? It depends on what neighborhood you want to explore.

Below, we spotlight the best places to get dumplings in New York City, whether you’re looking for Xiao Long Bao (soup dumplings) or something more tangential, like potstickers. Either way, we’ve got you covered. Bookmark this post for easy reference later!

This list includes everything from OG classics to up-and-coming hot spots, but all of them are reliably great. (These results are based on staff expertise, local chef polling, and a readers’ poll.)

This soup dumpling is so large that 4 people can easily stick straws in it and drink from it like a scorpion bowl (and yes, they do serve this dumpling with a straw for drinking the broth).

“XLB” is short for “Xiao Long Bao,” aka “soup dumpling.” Soup dumplings are a traditional Chinese steamed bun filled with meat and broth that spills out once you bite into it.

The proper way to eat a soup dumpling is to first place the dumpling in the soup spoon that comes with it. Then, take a small bite from the side to let out the steam. Once the broth has cooled a little bit, you can “drink” the broth from inside the noodle casing. Then, eat the rest of dumpling using your chopsticks. (We asked an expert, and this is the preferred method.)

Recently, Drunken Dumpling has added colored potstickers to their menu, including the hot pink “Shrimp and Wood Ear Mushroom” and bright green “Shrimp with Bacon and Orange Slice” potstickers, above shown. 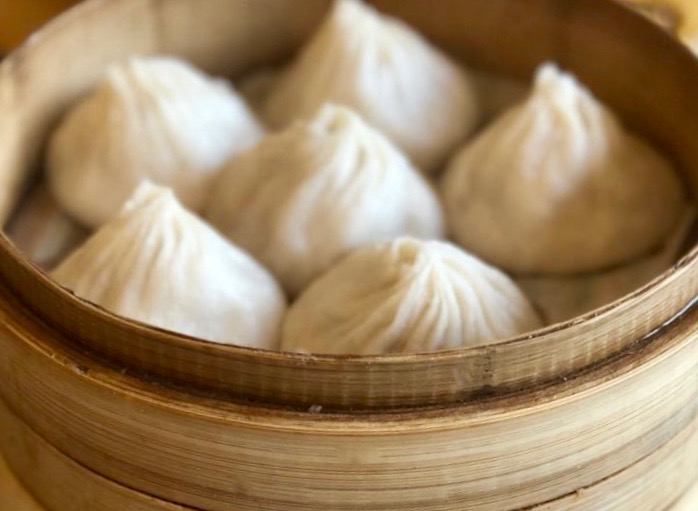 Nan Xiang Xiao was listed in the Michelin Guide every year specifically for its soup dumplings. This budget-friend Shanghainese restaurant makes some of the best dumplings in NYC, according to everyone from seasoned experts to Yelp novices.

Soup dumplings as we known them originated in a suburb of Shanghai called Nanxiang, from whence this restaurant gets its name. While service at Nan Xiang Xiao Long Bao is adequate and by no means reliable, it’s worth it for the thin, beautifully braided golden dumpling noodles and their tender, umami filling.

Opt for the traditional pork mainstay or the pork-and-crab combo dumplings. (Or, if you’re like us, get both!) 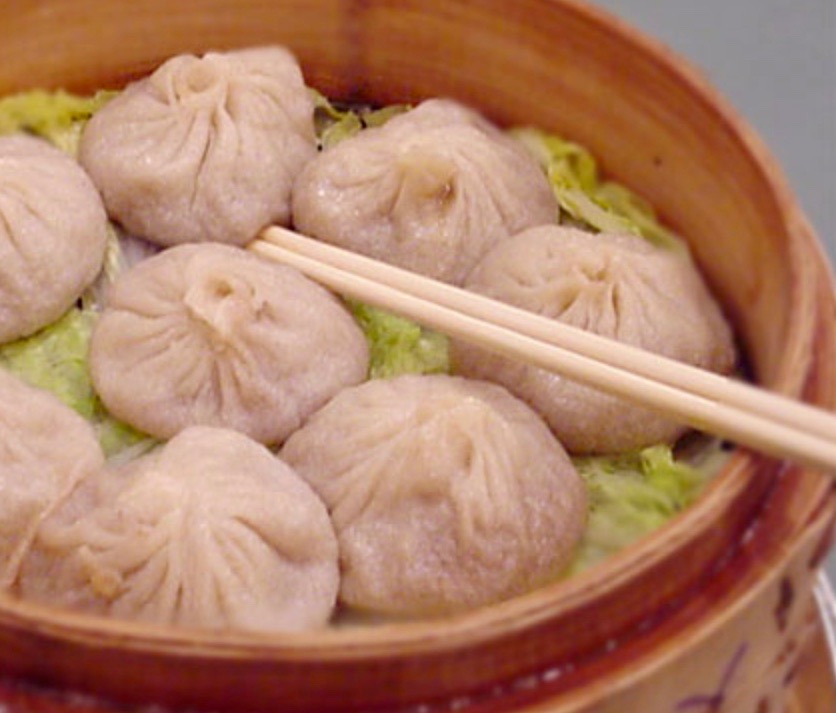 Famous for their soup dumplings and delicious pork shoulder, Joe’s Shanghai is a Chinatown mainstay. Today, due to popular demand, the establishment also has a location in Flushing, as well.

New York foodies will appreciate the history and legacy of this place: in 1996, a New York Times reviewer famously said, for the first time, that Joe’s Shanghai dumplings were “the best things in the whole world.“

Today, the Internet tends to agree.

First, start with a shredded turnip shortcake and/or scallion pancake, then move on to the crab meat dumplings. Be sure to leave room for dessert, as the homemade sweet red bean shortcake is easily the best you’ll ever have. Joe’s Shanghai didn’t earn the title of “best dumplings in NYC” for nothing.

In conclusion: no matter what you order, you can’t go wrong. Plus, the no-frills Chinatown location feels very authentic– like a secret spot that you’ll be excited to tell your friends about.

Buddakan‘s insane, lavishly decorated “Vatican-sized” complex by Stephen Starr is known for its pillowy green edamame dumplings, which are among the finest and most delicious of those you can get at any sit-down restaurant in NYC.

The generous size and silky, almost mashed-potato-like edamame filling is infused with truffle, making them a cult favorite among NYC socialites. Oh, and the shallot-sauternes broth? It’s divine. There’s nothing quite like these dumplings anywhere else.

Buddakan is a restaurant where many people go to “see and be seen”. But, it’s not just about the scene. Starr’s team also makes excellent General Tso’s Dumplings, bright orange carrot dumplings, and even decadent fois gras chicken dumplings served in a lemongrass consommé.

All of them, of course, are made in-house daily, by hand. For fancy dumplings in NYC, this is the place to go. 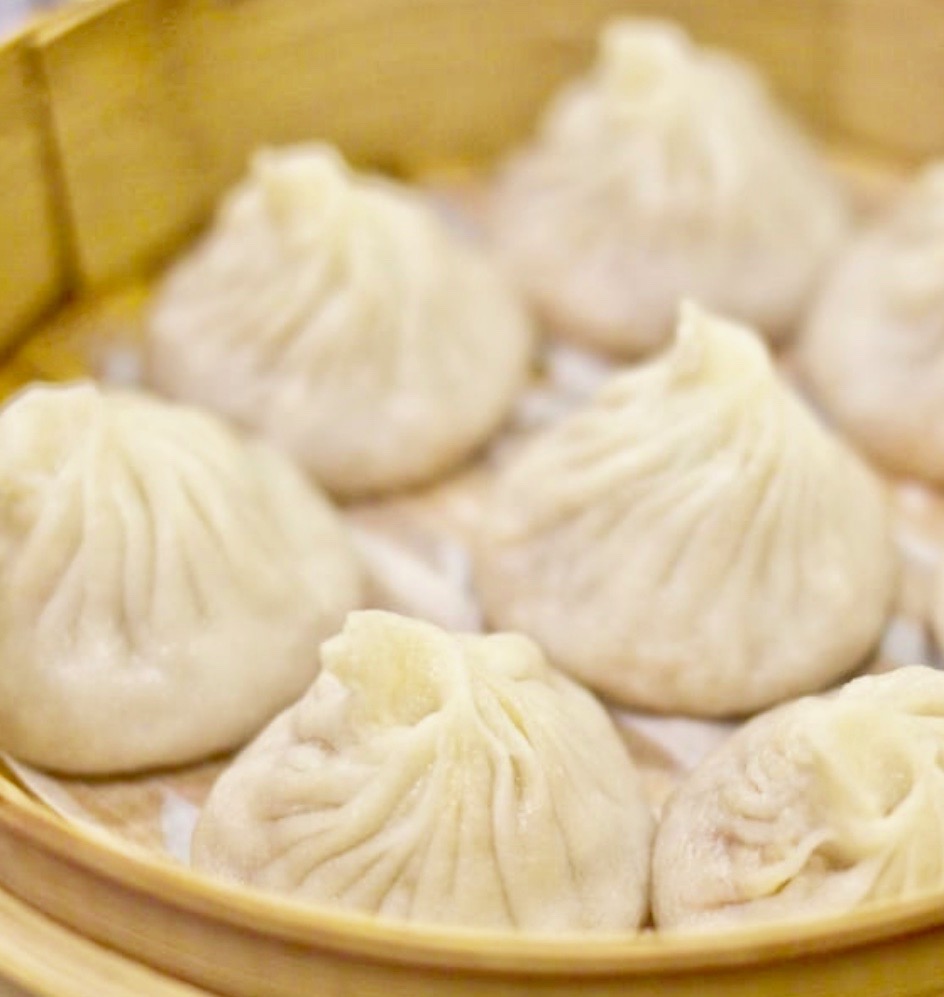 Shanghai 21 is conveniently located on Mott Street, in the epicenter of New York Chinatown. While the restaurant itself is not elaborate, the menu boasts what might be the city’s widest variety of dumpling flavors. Plus, they deliver! (Check out their menu here.)

The restaurant also offers a wide variety of Lo Mein that’s worth checking out. Locals love the portions and prices (the black truffle soup dumplings are a great value considering the truffles).

Xi’an Famous Foods is a New York City-specific chain of Western Chinese-style noodle and dumpling bars. These small and bustling establishments are wildly popular (an Asian friend who now lives in Hong Kong goes to Xi’an Famous Foods first thing whenever she comes back to NYC, if that’s any indication).

Second in recognition only to their iconic Spicy Cumin Lamb Hand-Ripped Noodles, the Spicy & Sour Lamb Dumplings do not disappoint. (Get these dumplings if you’re serious about noodles!) With 14 different locations around Manhattan, Queens, and Brooklyn, Xi’an Famous Foods is also easy to find.

Opt for the lamb dumplings in broth if you want more of a soup vibe. Or, stick to the classic, which comes in a rich, thin sauce. (PSA: everything here is somewhat spicy as a default.)

No matter what you order, the dumpling dishes pair beautifully with the shop’s signature Sour Hawberry Tea. They also offer Chinese classics like chrysanthemum and jasmine tea.

Plus, vegetarians will love Xi’an’s Spicy & Sour Spinach Dumplings, which are very popular, as well. In short: Xi’an is an instant, affordable classic. If you only eat at one dumpling spot in NYC, this should be it. 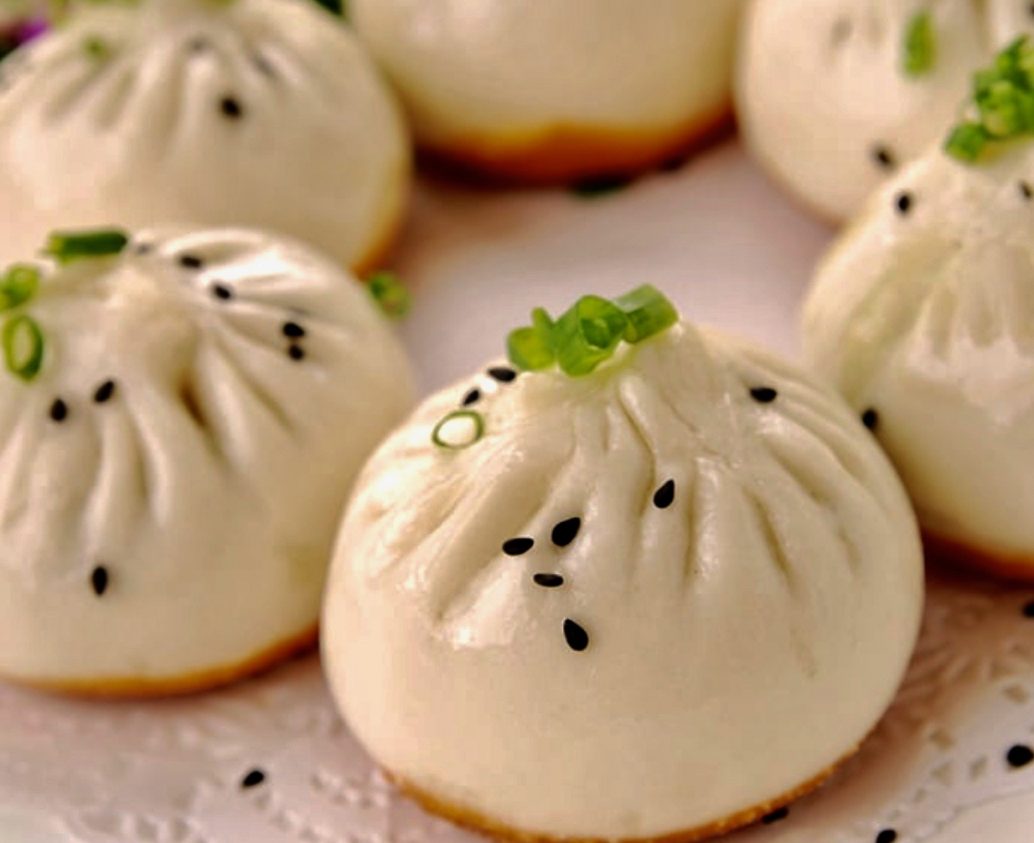 Shanghai You Garden (Delicious and Trendy)

Despite its far-flung location in Flushing, Shanghai You Garden is always busy. Be prepared to wait in line. We also love getting steamed crab meat and pork buns to go. Their rich soup filling and delightful crab topping are not to be missed.

It’s the little touches that really stand out– like the black sesame and chive garnish atop the soup dumplings. Or the quirky doilies they serve them on! (There’s also a chef’s special that is questionably titled “Shanghai Style Stinky Tofu”… you’re on your own with that one.)

Like Drunken Dumpling, Shanghai You Garden also serves giant, singular soup dumplings (though these ones are not quite as large). We recommend going with a group and ordering a variety of steamed pork buns, pan-fried dumplings, and Shanghai shao mai. Because all dumplings are better when you share them with friends… right?

Related: The 16 Best Asian Restaurants in New York City, according to a veteran local food critic and her discerning South Asian husband.

Also: From crab cake tacos to crunchy hongos, these 5 Awesome NYC Taco Spots have some of the most unique menus in the country!