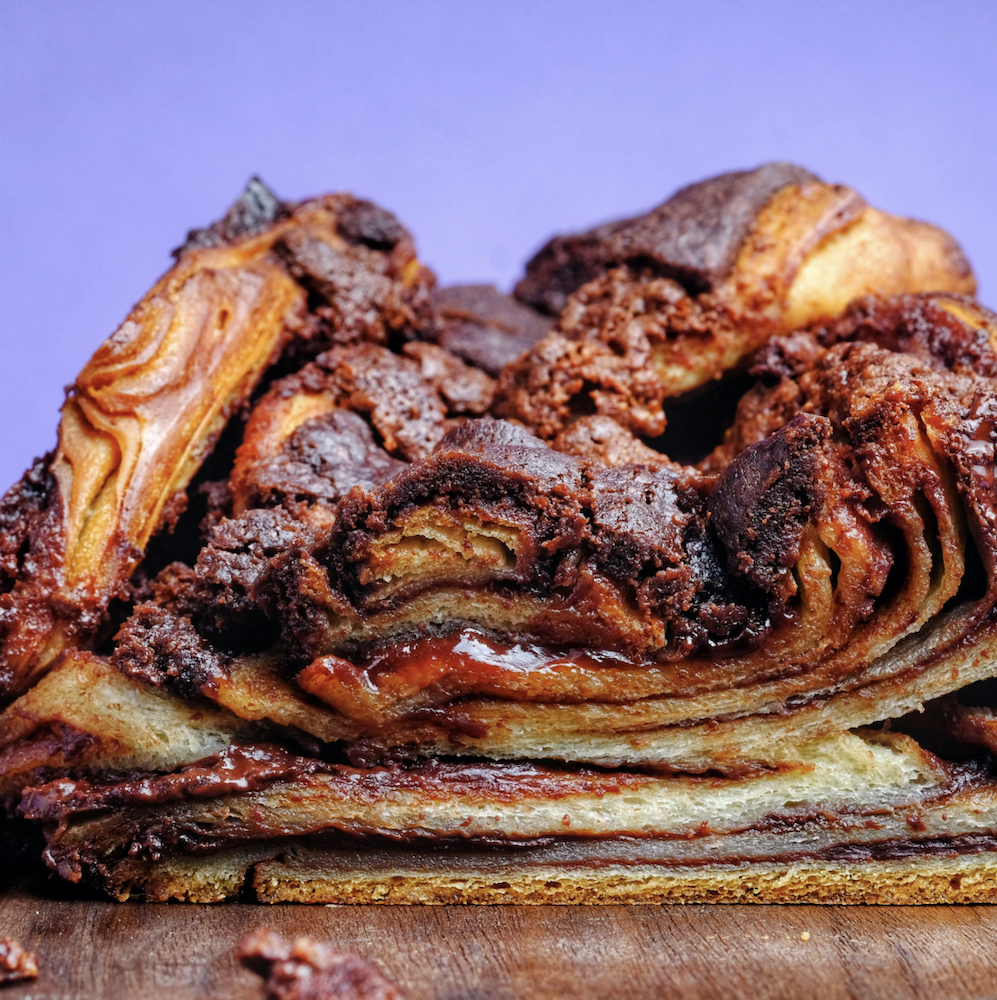 Chocolate babka is one of those New York City food staples that, like bagels and pizza, is the subject of much fanfare. Where to get the best chocolate babka in NYC, moreover, is a matter of fierce debate, with locals and foodie tourists alike clamoring to try all the best iterations of this niche New York baked good.

Is this an extremely nice interest? Yes. Is it worth the pursuit? Absolutely. As a longtime New York City culture critic, I can tell you firsthand that there are few experiences as pleasure-filled as tearing into a hot loaf of chocolate babka.

Fortunately, there are a number of amazing places to get gorgeous, fluffy, decadent chocolate babka in New York City. This is the best U.S. city for babka, after all!

Ultimately, whether you want to try the classics or cool hidden gems, we’ve got you covered. Bookmark this list for easy reference later!

Below is a quick rundown of where to get the best chocolate babka in NYC– and likely the entire world. Bakers here just do it better. Enjoy!

Of all the bakeries hawking their own take on classic New York City chocolate babka, Russ & Daughters is THE OG. That’s why their Instagram page frequently showcases videos of their staff seductively cutting into a luscious loaf of this perfect braided treat. The people know how good it is.

This soft, luscious bread hits all the right notes: slightly crispy on the outside; lots of soft, fluffy layers inside; and a perfectly-dense ribbon of chocolate that isn’t overpowering throughout. It’s basically perfection.

The bread is fabulous on its own, toasted with butter, or eaten by the hunk– but R&D also sells Babka Ice Cream Sandwiches in the summer! See below.

That’s right. Just when we thought babka couldn’t get any better, they started serving it in ice cream sandwich form. The dessert consists of two slices of chocolate babka sandwiched around their own homemade vanilla ice cream. (<— This ice cream has chunks of more babka folded into it. So good!)

It’s also likely the most well-known babka in the city, made with crowd-pleasing Nutella and dark chocolate. (The bakery also sells a unique cinnamon babka with currants and walnuts, which is very old-school.)

With multiple locations around NYC, Breads Bakery has perfected the art of mass production and consistency when it comes to this niche bread staple. Today, it’s a food blogger favorite, with Food Network up-n-comer Molly Yeh saying it was one of the “best things she ever ate” when she lived in New York City. (Her other favorite thing? Hand-pulled noodles at Xi’an Famous Foods.)

Anyhow, the bakery’s main location is in Union Square– but Lincoln Center and the Bryant Park Kiosk typically pack the same supply. The chocolate babka at any of these locations rarely sells out (but it’s not unheard of) so you don’t necessarily have to go early to get what you want.

Gabriel Kreuther’s classic French brioche braided with chocolate ganache and dark chocolate pieces might be an underdog in these kinds of food lists, but that’s only because many NYC foodies still don’t even know about it.

This decadent chocolate babka– and I say this as someone who writes about food professionally— is the most delicious babka in NYC. Period. The flavors and textures here are masterful. It might even be the best chocolate babka in the entire world! (And I’ve eaten it everywhere, trust me.) It’s absolutely insane.

Ever since the iconic French chocolate maker embraced the fine-dining world of NYC, locals began associating Kreuther with his eponymous French-Alsatian restaurant, Gabriel Kreuther (which is easily one of the Best Fine Dining Restaurants in NYC).

Nevertheless, Kreuther is deeply vested in the confectionary side of his culinary enterprise. He’s a Master Chocolatier, and his chocolate shop’s incredible chocolate babka is a perfect example of how he weds French patisserie prowess and Michelin-starred culinary finesse with his self-proclaimed “love of New York City”. The resulting lush ribbons of chocolate speak for themselves.

If ever there was such a thing as an upscale chocolate babka, Kreuther’s would be it. ^  Just look at that picture! French chocolatiers always know what they’re doing, believe me.

Those of you who know good food and who have eaten well in life: You’re gonna want to try this.

This gorgeous, yeasty-crumbed bread has loads of marbled chocolate swirls and a nice neutral crumble on top. It’s even better warm with butter!

For 25 years, Green’s Bakery was the supplier of Dean & Deluca’s famous chocolate babka, which was sold in their beloved pastry section until the gourmet market closed in 2019. (RIP, Dean & Deluca. But that’s a whole other story.)

Many devoted New Yorkers discovered Green’s cinnamon and chocolate babkas at Dean & Deluca (that’s where I had it for the first time!) and many fell in love without ever knowing who really made it. Spoiler alert: It was Green’s.

Fortunately, you can now order Green’s famous chocolate babka directly from the bakery online. They sell it in rounds, loaves, and swirls, as well as a new mini loaf size that is totally adorable.

And don’t let the grocery-store style packaging fool you: Green’s babka is an authentic gourmet product. They are “the original Brooklyn babka”. And there isn’t an ounce of pretense to their name even though this babka’s flavor warrants bragging. Green’s is great. Enough said!

Speaking of old-school Brooklyn bakeries, Williamsburg’s own Oneg Heimishe Bakery (formerly Oneg Bakery; they recently rebranded) serves another beloved Brooklyn babka that is 99.9% chocolate by volume. (Or so it seems!)

This traditional kosher double chocolate babka is imbued with mind-bogglingly rich, wet folds of chocolate heaven. As a result, New Yorkers can’t get enough of it!

The owners’ grandmothers came to NYC after fleeing Hungary in the post-World War II era, and they brought the classic recipe for this chocolate babka with them. True to tradition, today’s loaves and beautiful babka rounds remain delicious and enduringly authentic.

Still, the family-run CRC Kosher bakery is slightly under-the-radar beyond the purview of hard-core foodies. But Oneg has a dedicated following among those in the know. Once you taste the dense, sticky interior and cookie-crumb-like crust of their wonderful chocolate babka, there’s no turning back. It’s amazing!

Try the double chocolate babka— made with twice the amount of chocolate as their original babka!– for the quintessential experience.

Plant-based cafe hot spot By Chloe (an NYC original which has since franchised to other cities) sells an incredible matcha chocolate babka at their Sweets by Chloe bakery that is so freakin’ good! It’s worth keeping an eye out for it. They also sell classic babka, but the Matcha Chocolate is the real star of the show.

This superfood-infused babka is a little denser than traditional loaves found elsewhere in NYC, but that’s part of the charm! Toast it with coconut butter or hazelnut spread for a real treat. Or, use it to make epic matcha chocolate babka french toast. (It’s so good.)

I’ve also seen people on Instagram using this bread to make matcha chocolate babka bread pudding. This requires little more than milk and eggs, as the bread is already pre-sweetened.

No matter how you enjoy it, by Chloe’s matcha babka is worth the splurge. And if you’re looking for a unique bread with no artificial preservatives, this is the babka for you. I used to buy it by the loaf anytime I passed their SoHo location. #NoRegrets.

Plus, the subtle hit of matcha gives a gentle, calming energy boost. Any excuse to start your day with babka, right?