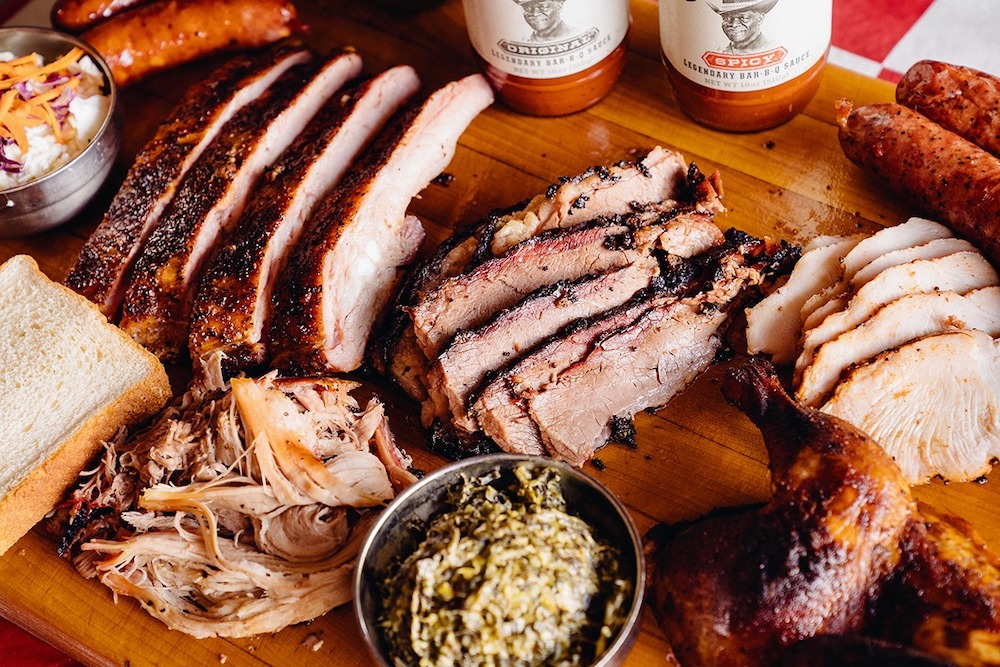 Texas Hill Country style BBQ centers around brisket and traditionally involves cooking meats over wood ash, not just coals. Not many people do it the old-fashioned way– except for the celebrated pits pedaling the Best BBQ in Austin. If that sounds interesting to you, then you’ve come to the right place!

Like tacos, barbecue is a classic local food to enjoy in Austin. Eating BBQ in ATX is practically synonymous with the place!

For the true local experience, be sure to try Austin smoked brisket, BBQ ribs, and/or pulled pork. (I recommend ordering all three, which is a convenient excuse to share if you only have time to eat at one of the places on this list.)

Austin has no shortage of dedicated BBQ joints, moreover. Still, the Big League players in this guide are commonly named for a reason. People here just do it right. In Austin, ‘Que is a passionate vocation for many, and a way of life for local meat-eaters.

So, without further ado, let’s get into it.

For the most rootsy experience, you’ll have to drive out to Snow’s BBQ in Lexington, Texas, about an hour outside of Austin. (But that’s another story entirely; more on that, later.)

Below is a basic rundown of the best BBQ joints in Austin, and what to order where for the most authentic, rewarding meals.

It’s all so good, which is why this list is in no particular order. Bookmark this guide for easy reference later!

Remember to ask for extra napkins, and enjoy!

Salt Lick BBQ— technically “The Salt Lick BBQ” but everyone just calls it “Salt Lick”– is a venerated local classic when it comes to good BBQ in Austin. Every BBQ snob in the city has eaten here at least once, and with good reason.

This old-fashioned pit has been around since 1967, and between its rustic outdoor ambiance and generous combo plates, it’s something of a wunderkind in the local BBQ vernacular. I love the brisket and the ribs, but there is so much variety and all of it is so excellent that it’s hard to believe one pit can manage to smoke so many different genres of meat so well.

Take, for example, the unique Bison Ribs Plate. This succulent, slow-cooked BBQ offering is hard to find not just in Austin, but anywhere. Bison Ribs are pretty rare, which is why I recommend ordering them here if you like trying new things.

They also do a mean Turkey and Sausage Plate and have “Relly Big Sandwiches” like Marino’s Triple Chop, featuring chopped brisket, sausage, and ribs with pickles and onions.

The original Salt Lick pit in Driftwood is BYOB, for those who drink. It’s also a great place to try fatty tips and brisket with a perfectly-smoked rind.

The pit’s reputation proceeds it so much that you can even sample some Salt Lick barbecue at the airport on the way home, in case you’re an out-of-towner looking to get one last fix.

(My husband once went to a bachelor party in Austin and brought some ribs home on the plane. We ate them in our New York apartment mere hours later. After years of eating here in Austin, I was surprised how well it held up after 5+ hours in transit!)

For the quintessential experience at Salt Lick, order the Brisket & Pork Ribs combo plate, which comes with potato salad, coleslaw, and beans. Bread, pickles, and onions are available upon request.

Also, Salt Lick makes their potato salad with sweet potatoes, a subtle but delicious detail that makes all the difference.

And for those who don’t eat beef, we also love the classic pork rib plate and the pulled pork combo plate (pulled pork with your choice of sausage, pork ribs, or turkey). Just be sure to save room for the delicious pecan pie as dessert!

And when they’re serving bread pudding (usually on Sundays), forget about skipping the sweets. You’ve got to try it.

If you want to try Franklin Barbecue in Austin, you’re going to need to plan ahead. Either wait in a long line or win the lottery– literally.

Helmed by James Beard Award-winning pitmaster Aaron Franklin, this iconic, world-renowned barbecue is open from 11 AM to whenever they sell out each day. This inevitably happens around 2 or 3 PM. It’s that good.

Basically, this celebrated Austin barbecue institution is known for its half moist, half lean sliced brisket and pork spare ribs with all the fixin’s. It’s one of the 50 Best BBQ Joints in America, and they claim to be “serving the best barbecue in the known universe”.

^ Many would agree. (I certainly do, though the hassle required to secure a meal here might be a little overwhelming for some.)

Order the brisket for the quintessential experience. Franklin Barbecue is known for its delicious smoked meats, which beautifully showcase the technique of Texas-style barbecue at its foodie-finest.

When I used to go to fancy food charity events in New York City, with many of the world’s greatest chefs in attendance, they used to raffle off tickets to be able to “skip the line at Franklin Barbecue in Austin”. Then, people would pay literally thousands of dollars for this privilege.

It was for charity, after all. But the price tag also says something about the raw intrigue of Franklin’s, and how coveted the experience of dining there is. (I always used to always wonder: “What if they get there and someone says, ‘Nope, you have to wait in line like everybody else.'” Lol.)

All of this is to say that Franklin Barbecue attracts a lot of hype and fanfare. Still, the product ultimately delivers. The flavors here are both subtle and mindblowing. Just be sure to arrive right when they open (ideally, 30 minutes sooner) to ensure you can get in.

Stiles Switch BBQ is still a sleeper hit among longtime Austin eaters, even though it has previously been named one of the 50 Best BBQ Joints in America.

This Austin BBQ joint is also famous for another reason, though: the restaurant is located in Violet Crown Plaza, which is where they filmed the Emporium scenes in the iconic Richard Linklater film Dazed and Confused. (The Emporium is the billiard hall where Ben Affleck gets paint dumped on his head.)

Today, the restaurant’s exposed wood beam interior is THE place to linger over “BBQ and brews” on N. Lamar Boulevard. During SXSW and when weather permits, they often have live music, as well.

I went here for the first time on BBQ king Daniel Vaughn’s recommendation, and I ordered “The Notorious R.I.B.” (above shown). This cheekily-named special– and these are always changing– featured an epic 1-lb beef rib rack served on a bed of tater tots covered in queso.

Yes, queso. This is Texas, people!

It’s gluttonous and superfluous, sure– which means it’s also amazing and transcendently delicious.

The restaurant specializes in this kind of creative take on slow-cooked meats, from Brisket Enchiladas to Chicken Fried Steak with Sawmill gravy. Texas toast adorns each plate, and they include pickled red onions alongside their cuke pickles on every meat plate. (Just a small accent that I love.)

Stiles Switch, moreover, is one of those places where the meat is so flavorful that it doesn’t even need sauce. (A good litmus test, as any serious BBQ lover knows.) They know how to dress a plate to attract foodies and BBQ purists, alike.

Sides-wise, regulars love the corn casserole and the Hawg Rub Fries. There are also classics like mac n’ cheese, potato salad, and Switch House coleslaw. The so-called “Cadillac of the Menu” is the beef ribs plate, of course. Choose your own Texas-style adventure!

For a unique experience, try the Texas Frito Pie— a combination of brisket chili, Fritos, shredded cheddar cheese, sour cream, cilantro, and pickled onion. It’s a unique Texas take on nachos, and worth trying for the gimmick alone.

^ The only other place you can get this kind of dish is in Santa Fe!

The popular SXSW music venue Stubb’s BBQ is also a classic Austin BBQ establishment. They’re known for their tender Angus brisket, which is the thing that visitors to the city most commonly line up for, especially during the city’s most popular music festivals.

The smoke ring, the brisket’s crispy bark, and the way these two elements dovetail to make the perfect brisket sandwich is only made better with Stubb’s iconic Bar-B-Que sauce. (It comes in two flavors– Original and Spicy– and it’s one of the most iconic Austin souvenirs. Today, you can also purchase it at gourmet food markets around the country.)

Add a side of Stubb’s amazing Serrano cheese creamed spinach (the “world’s greatest”) along with house made potato salad and a Peach Sweet Tea cocktail and you’ve got yourself a deeply Texas experience.

Locals also love the Red River ‘Rita— so named after the street where the restaurant’s 155-year-old stone building stands. It pairs beautifully with Stubb’s Wings, which are smoked then flash-fried, and dressed with buffalo sauce or Bar-B-Que. Served with the house made super chunky bleu cheese and a cold Lonestar beer, there’s nothing better on Game Day (or any day).

For the quintessential sit-down experience, try to go for Sunday Gospel Brunch at Stubb’s. There may be a line snaking around the restaurant’s yucca-lined facade, but it’s worth the wait for live gospel music and authentic, family-style Texas BBQ.

In addition to three types of meat and three sides, all plates are served with biscuits and homemade sausage gravy, as well as coffee, iced tea, and “Nana pudding” to top it all off. And at $29 a person (and only ~$12 for kids), it’s a great family value that will keep you full all day.

Otherwise, if you want something more casual and individual, simply enjoy your brisket sandwich standing up while watching a concert in the backyard. (Check out the concert calendar here.)

Ultimately, my favorite way to enjoy Stubb’s BBQ is simply to go for a show and order a to-go item at the concession counter. This combo of live music and barbecue is a classic Austin experience!

Snow’s BBQ (Not Technically in Austin, But Worth The 1-Hour Drive)

Snow’s BBQ in Lexington, Texas is not technically in Austin, but it is an easy drive from there.

This iconic Texas BBQ joint was also notably featured in Season 7 of Netflix’s Chef’s Table, a special BBQ feature that highlighted world-famous Pitmaster Tootsie Tomanetz, who is 85-years-old as of this writing.

Tootsie cooks all of Snow’s meats with a firm dedication to old-school techniques, and she is part of the reason why this place has gotten so insanely popular in recent years. She insists on the doting details for which her pit has now become world-famous.

The obsessives at Texas Monthly even voted it “Best Barbecue in Texas”!

For Tootsie, moreover, barbecue is a true labor of love– and it shows. Two years ago, she was inducted into the BBQ Pitmaster Hall of Fame, and she still wakes up around 3 AM every Saturday just to get the coals going. (The pit is only open on Saturdays from 8 AM until sold out.)

As a result, visitors wait in the dark, in the cold, sometimes for hours, just to try Tootsie’s original Texas barbecue. Try the Brisket, the Pork Spare Ribs, or the Pork Shoulder Steak for the classic experience.

Since the Chef’s Table feature, Tomanetz has also become something of a local icon and selfie magnet. (Hard-core BBQ fans are always asking her to take pictures with them after they eat.)

There are certain people who travel all over America in search of good barbecue, and there’s a reason why Snow’s is always on the Bucket List.

Dine here and you’ll understand why!

Celebrating? These are the 8 Coolest Birthday Cake Bakeries in Austin.